Let me start by stating I sail monohulls, not catamarans. Aside from the occasional day on a big cat, I have no sea time to speak of, and I've never been through the anchoring routine on one either. I'll stick to areas where I have experience and some expertise - anchor snubbing - and apply it to catamarans. There's considerable information on the web regarding sizing and deploying anchor bridles on monohulls, but there's little information on these topics for catamarans. Unlike monohulls, sizing and selecting the optimal bridle for a catamaran is somewhat dependent on deployment desires and habits.

Should a single-leg snubber or a two-leg bridle be used? Catamarans should use bridles. It is one of the few areas where there's near-universal consensus among the highly-opinionated, independent-minded sailing community.

The wide beam and distance between a catamaran's bow cleats necessitate longer bridle legs than the equivalent length monohull. Consider a bridle hook set 20 ft forward of the bow cleats on the different hull types: if the cleats on a monohull are 4' apart, the bridle legs need to be about an inch over 20 ft (image below left). On a catamaran with bow cleats 18 ft apart, the same deployment would require ~22 ft legs (image below right). Similarly, cleats 24' apart would require just over 23' legs. As you can see, bridle legs need to be 10% - 15% longer for catamarans in the most popular cat size ranges. At 48° North Marine, we generally recommend bridle lines for catamarans be 25% - 30% longer than the equivalent monohull recommendations: 10% - 15% to accommodate the wide beam as discussed here and 10% - 15% to support longer deployments which we'll discuss in the Deployment section below. 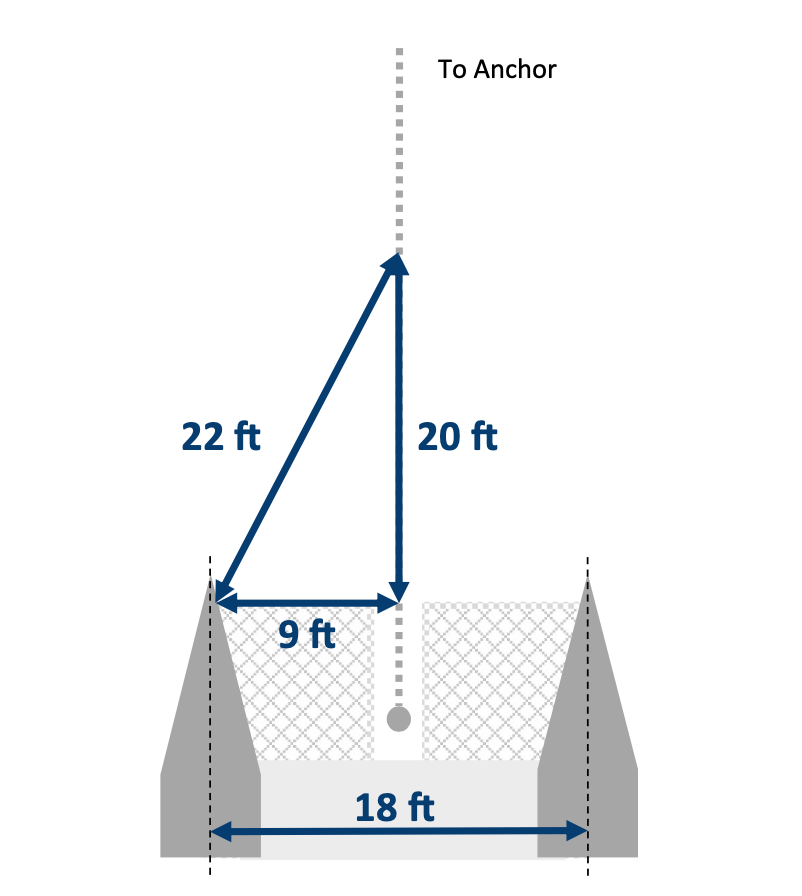 Increasing the line diameter of a bridle over the recommendations for an equivalent size monohull should be considered. Two hulls, high freeboard and catamarans' disdain for staying head-to-wind at anchor increase strain on bridle legs. Depending on deployment preferences, we typically recommend sizing up 1/8" - 1/4" in diameter. Drew Frye's article "What is Ideal Snubber Size?" in Practical Sailor suggests a little over half again the size for an equivalently sized monohull. Frye's recommendation might differ slightly from ours because we advocate for a smaller increase (1/8" over) if the owner is committed to longer deployments and a larger increase (1/4" over) if they are not. What does deployment have to do with sizing? Read on.

I've heard from readers as well as read posts on blown bridle legs on catamarans and they are frequently y-spliced bridles (y-spliced bridles are essentially a single-line snubber with a 2nd line spiced into it near the chain hook; see Snubber Bridle Design page for more detail on this bridle type). On the monohull side I rarely hear of bridle failures, y-spliced or otherwise. Until recently, I assumed the blown bridles were a function of incorrect sizing related to using monohull sizing tables which invariably recommend bridles too small for cats. It wasn't until a reader sent me a picture of his blown bridle that it occurred to me lateral, or horizontal, forces could be the culprit. The bridle remnant looked as if someone tried to violently rip the splice apart by pulling the legs in opposite directions. I did the math and it turns out lateral forces are only half the problem. The increased strain generated on the legs is the other half, and, assuming everything else is equal, the magnitude of these forces on each is a function of deployment length.

Let's assume, for example, the boat induces a load of 1000 lbs (a 22,500 lb vessel moving at 1 knot at anchor). There is no yawing, pitching, windage or other extraneous forces considered for this example. If the boat is pulling directly on a single line snubber, the tension force is 1000 lbs on the line (below left). If two lines are deployed in parallel (lower right), the tension force is 500 lbs (assuming each is loaded equally) and the lateral force is 0 lbs. 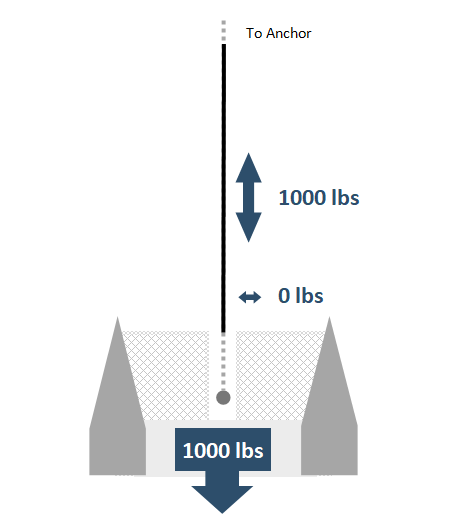 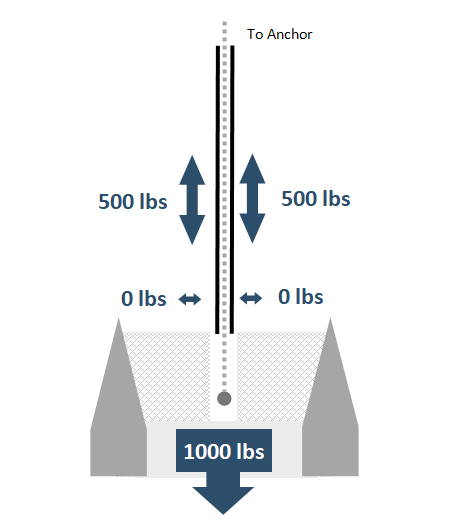 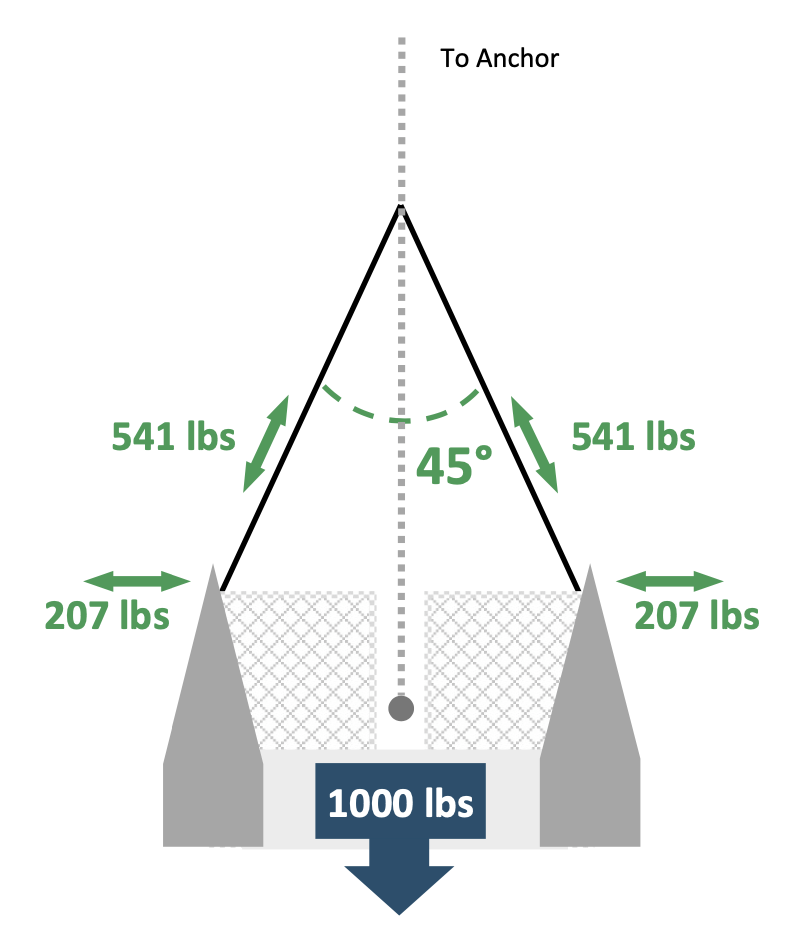 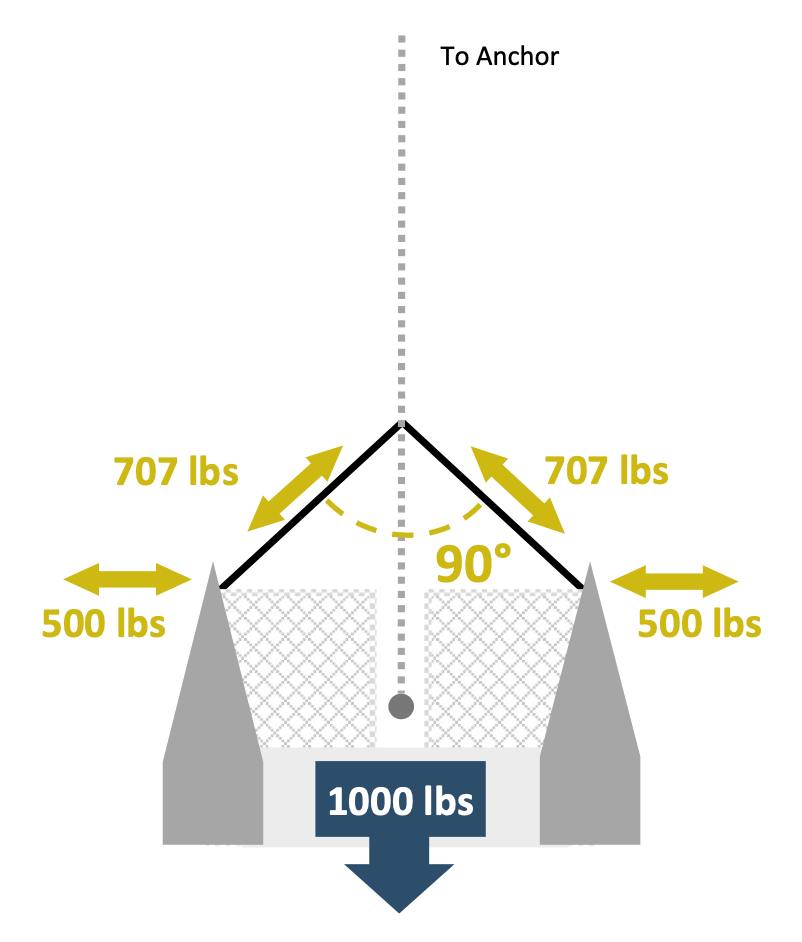 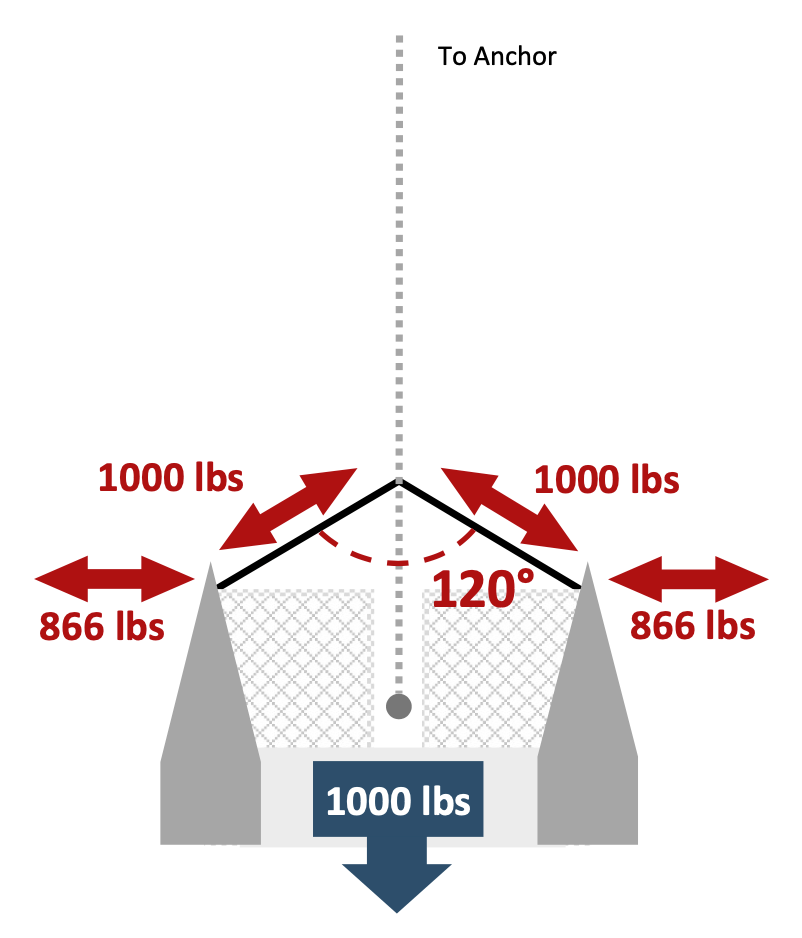 Let's break this down. For a 22,500 lb monohull moving at 1 knot at anchor, our calculator recommends 1/2" line, and when sizing up 1/8" for a catamaran (lower-end of the range recommended above), the bridle lines should be 5/8". If the minimum break strength for 5/8" 3-strand nylon is 8900 lbs and we use a working load limit (WLL) of 12% it yields 1068 lbs. In looking at the short deployment diagram (above right), the bridle lines would be cycling near their WLL, not to mention the high lateral forces imposed on the splice (y-splice bridle) or shackle (independent-legged bridle). If we add windage and veer back into the example, we're probably over the WLL on the shortest deployment. If we consider the longest deployment(above left), we're still well within the WLL's of 5/8" lines.
If we size up 1/4" (the upper-end of the range recommended above), the lines would be 3/4" in diameter. If the minimum break strength on 3/4" is 12,800 lbs, the WLL is 1536 lbs at 12%. This gives us a safety margin for the shortest deployment, but it's not significant when you add extraneous forces back into the example.

Let's say the wind is forecast to increase to 60 knots so let's increase the boat speed at anchor to 1.25 knots. The load increases to 1556 lbs so let's look at these forces again. 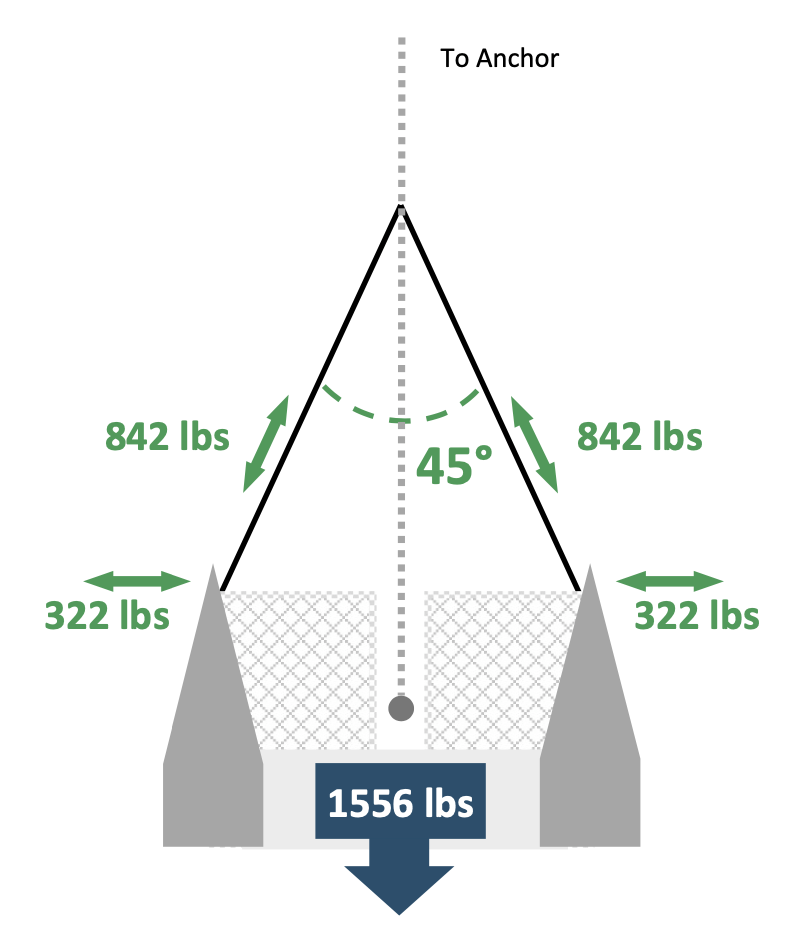 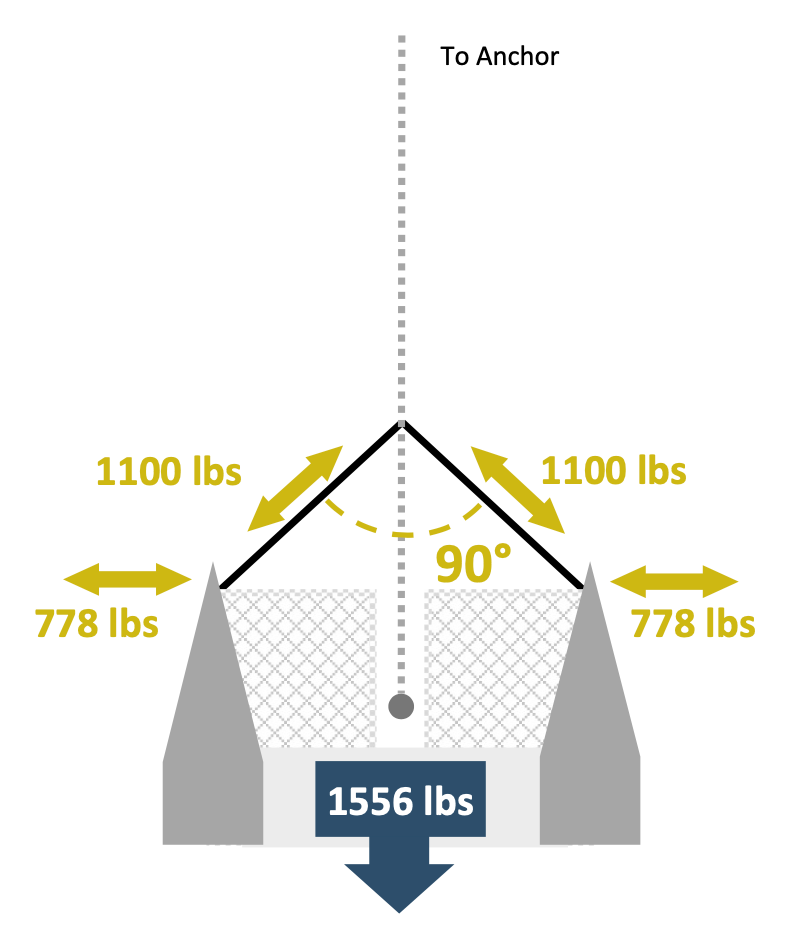 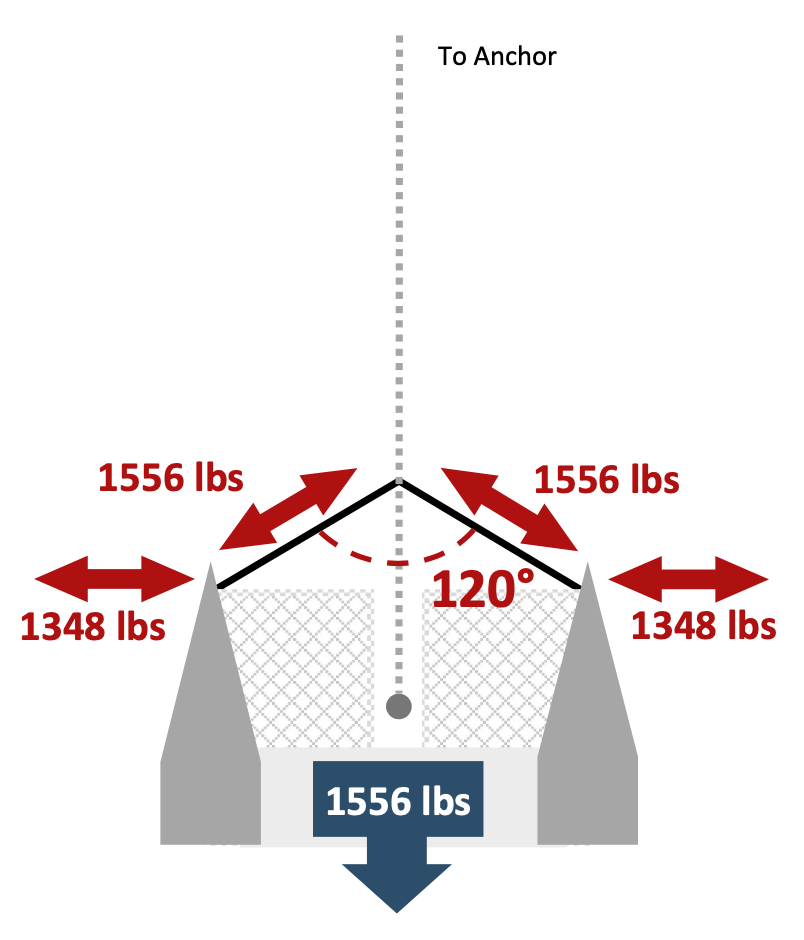 On the shortest deployment (right), tension forces exceed the WLL of both 5/8" and 3/4" lines and the lateral forces exceed the WLL for 5/8" and are approaching the WLL for 3/4". The longer deployment, however, remains well under the WLL for both. What does all this mean? Short deployments, even in moderate wind, subject very high loads on the bridle, deck and hardware. Sure, you can go with lines larger than the recommmendations, say 1", but for a 22,500 lb vessel on a short deployment, the decceleration cycles from reduced elasticity would be rough on the boat and crew. Additionally, who wants to lug 20' - 30' of 1" lines plus shackles and a hook. I regularly build single-line snubbers from 1" line and they're beasts to handle. I can't imagine wrestling a 20 ft - 30 ft bridle made with 1".

Looking at the two short deployment examples (two upper right diagrams), consider the extraordinary lateral forces generated and the implications on the point where the two bridle lines connect - the y-splice or the shackles on an independent-legged bridle. Bow shackles (the shackle type used on most anchor bridles) are designed for omni-directional loading and many are load rated, but what is the rating for a y-splice pulled laterally? If a splice is tensioned longitudinally (along its long axis), it retains roughly 90% of the rope's strength but y-splices are not designed to handle extreme side-to-side lateral loading. How do we reduce high lateral loads? Longer deployments. While independent-legged bridles are probably the safer bet with their wider safe deployment range, very few chain hooks can handle 2 independent legs. A y-splice bridle may be your only option since it'll work with almost any hook. [Images: Y-Splice Bridle, Independent-Legged Bridle]

What constitutes a "long deployment"? Where the inside angle (point where the two bridle lines meet at the splice or shackle near the hook end) is 45° or less. Here are some suggested minimum deployment lengths for various cleat spans to stay within the recommended 45°:

The physics prove longer deployments are better but what if you don't have the depth? You don't want your bridle hook sitting on the bottom. What if you have a forecast for 45 knots all night and are in 10 ft / 3 m of water? Understanding the impact of a short deployment and the damage caused by long periods of strain cycling you can make an educated decision to stay put and deploy short, move to deeper water and deploy long, or employ another solution.

What is the best method for attaching the bridle to the boat? Cleat hitch? Hard eyes shackled to bow eyes? Soft eyes on cleats? Since these are all viable methods with very little difference in function or performance, the choice will likely be based on personal preference.

Hard eyes attached to bow eyes with bow shackles are convenient if the bridle can easily be made fast to the deck without unshackling the bridle from the bow eyes. Bridle adjustments for motion can still be done by pulling leg(s) in and hitching them to bow cleats without unshackling from the bow eyes. Bridles with hard eyes and 2 additional shackles can be more expensive and the life of the bridle will be reduced somewhat due to the increased exposure to sunlight from being on deck.

Having soft eyes or untreated ends have been discussed in more detail elsewhere on this site, but the short version is this: does it really matter if you have a soft eye or not? Personally, I prefer untreated ends because I have 3 - 4 "semi-preset" lengths I typically use. Current and forecast conditions, seabed composition, confidence in set, tidal current and swing all play into my deployment decisions. Since it’s a rare night that I set all 50’, I would rarely use the soft eyes at the end. If I deployed the full length of my bridle every night and stowed it on deck when underway, I would likely reconsider that decision.

Once we have the bridle line tension force, we can easily calculate the lateral (horizontal) force.